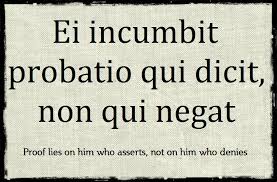 One of the oldest concept in law is the presumption of innocence. We can trace it back to Rome and see it in Islamic readings of the hadith. It is part of English common law and an article of faith in US law. Also, a part of our law is the 6th amendment giving the accused the right to face their accuser. These two aspects of our legal system don’t seem to apply to our political leaders, at least not currently. Opposition political leadership and the mainstream media have taken it upon themselves to place rumors in front of the American people as facts. If there is a semblance of fact, a meeting took place, the content and implications of the meeting are again presented as facts where none exists.
Many of these reports from the media are credited as coming from anonymous sources or multiple anonymous sources. These sources are often cited as current or former government officials, which gives them an air of authority. Anonymous sources have been a mainstay of journalism for a long time but are also considered the least credible. While an anonymous source may be the only way to get the start of a story a good reporter will also work to confirm the information by other means.
I do not intend to go into the specifics of the problems arising from the lack of ethical journalism, I have done so in past posts ( https://pleasethink1.com/2017/05/24/i-want-to-believe-the-press-but/ and https://pleasethink1.com/2017/05/26/a-modern-witch-hunt/ ) but I would like to discuss the lack of cultural imperatives in this new reporting. By this I mean we are lacking the very basic social philosophy that has made the US great. While it is not unheard of to put a politician on trial through the press it is always wrong. It is wrong to make criminal accusations without proof and cite unnamed sources that cannot be confronted. The most famous anonymous source in recent history was Mark Felt, deep throat of Watergate fame. Felt, as it turned out, provided leads to find the information, not the information itself. Woodward and Bernstein then did the job of good investigative reporters and found the truth and reported it.
Acknowledging that news media outlets do not have the same constraints as the courts in regartds to evidence, they do have an obligation to the public to at least try to get it right. The rush to publish has caused an avalanche of reports that have not been researched or confirmed. The reports are then picked up by other outlets and reprinted as facts. No one is even asking who the sources are and no one is trying to verify the accusations. President Trump is treated in the news media as a criminal with headlines blaring that he needs to be impeached for crimes ranging from obstruction of justice to treason, yet there is no proof. On the other hand, the person who opened fire on a group of congressional republicans at a ball field in Alexandria Va., who was shoot and captured with the rifle in his hand, was initially reported as “the ALLEDGED” shooter.
A great American trait is to give people the benefit of the doubt. This concept works in all avenues of life. Before you accept a statement or claim or anonymous report PLEASE THINK to carefully check it out.